The Red House Mystery – A. A. Milne 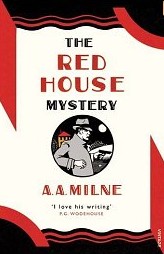 It’s rather a surprise to realise that Milne, now known best for his Winnie-the-Pooh books, poetry for children and dramatization of The Wind in the Willows, Toad of Toad Hall, wrote a detective novel. In the entertaining foreword to the book (written for the 1926 reprint), Milne writes that he wrote the kind of detective novel that he himself liked to read – in good English, without romantic interruptions, with a strictly amateur detective and a slightly less intelligent Watson to whom the detective must explain his reasoning.

Having been written in the 1920s, the scene is set at the Red House in the village of Stanton, owned by Mr Mark Ablett, staffed with the usual cast of servants – though Milne does them the service of portraying them as people with their own thoughts, even if we don’t see much of them later – and with a house party consisting of Mr Matthew Cayley, Mark’s cousin and general secretary, guests Major Rumbold, Bill Beverley (a bright and facetious young man), Ruth Norris, and Mrs Calladine and her daughter Betty. At breakfast, Mark receives a letter which announces the imminent arrival of Mark’s evidently black sheep brother, who has spent the last fifteen years in Australia, and, reluctantly, he orders Stevens the parlourmaid to show Mr Robert to the study when he arrives. The other guests plan to play golf that afternoon.

Also introduced is Mr Antony Gillingham, who arrives in the village of Woodham having got out at the station “because it pleased him”, but who strolls over to the Red House to see his friend Bill on the day of the crime to find it being discovered. Mr Robert has been murdered, and Mr Mark has disappeared.

Gillingham decides to play detective, aided by Beverley, and although the police investigation, headed by Inspector Birch is ongoing, they’re convinced that Mark did the deed and are concentrating their efforts on finding him. Gillingham isn’t quite so sure.

Milne plays fair with the reader, outlining Gillingham’s reasoning as the story progresses, and explaining all the clues in a consistent way. The characters aren’t as fully three-dimensional as this reader would like, but neither are they stereotypes (even if I didn’t sympathise entirely with any of them); the dialogue is entertaining and the situations often amusing.

The book is then ended with the murderer’s confession, and Gillingham’s explanation of how he arrived at the correct conclusion and managed to alarm the murderer into confession (and, it is strongly implied, a gentlemanly suicide).

It’s not a long book, nor very meaty with psychological insights, but it’s an ingenious, practicable murder, and Gillingham solves it with care and intelligence. I think it’s a worthy addition to the ranks of the Golden Age of detective fiction, not quite as quirky and light-hearted as Edmund Crispin’s Gervase Fen books, but certainly not as serious as Sayers. Although the characters take the mystery seriously, Milne’s tone is quite superficial, and there are episodes which are more light-hearted.

In short, this is an entertaining crime novel, but one which I’m unlikely to want to re-read.

This entry was posted in 2009 New Reads, Crime fiction, Fiction, Reviews and tagged 1920s fiction, A A Milne, clues given to the reader, country house murder, doppelganger, gentleman detective. Bookmark the permalink.

1 Response to The Red House Mystery – A. A. Milne