Meet Me At The Morgue – Ross Macdonald 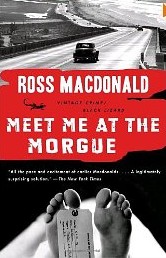 This is one of Macdonald’s earlier novels, and doesn’t feature Lew Archer, his main protagonist and narrator, but with very little alteration, Meet Me At The Morgue could be an Archer novel. The novel is told in the first person by Howard Cross, a probation officer in the Californian city of Pacific Point, in a similar style to Archer’s narration: the first paragraph is typically Macdonald:

I met the boy on the morning of the kidnapping. It was a bright and blowing day. The wind was fresh from the sea, and the piled white cubes of the city sparkled under a swept blue sky. I had to force myself to go to work.

Fred Miner, driver to Abel Johnson, a wealthy man, has come into town to speak to Cross’s colleague about the terms of his probation – Miner had been driving under the influence of alcohol and run over an unknown man, killing him – and has brought his employer’s son, four year-old Jamie, along for the drive. While talking to Fred, Cross gets the impression that Miner is hiding something, but merely reiterates his probation conditions before man and boy depart.

A few hours later, Mrs Miner comes to the probation office with news of Jamie Johnson’s kidnapping, and fears that her husband may be involved. The ransom letter arrived by post that morning, and thus must have been posted before the child left the family house that morning. Feeling a responsibility for Miner, Cross tries to find out what has become of the ransom money left at the train station, and, following the clues he comes across, finds a dead man in a car, killed with an ice-pick. The bag is in the car, but the ransom money has gone.

The trail of clues which Cross identifies and follows leads to a more straightforward plot and crime than Macdonald’s Archer novels, but as usual the writing is subtle and well done.

The characters are interesting, and Cross lets his own feelings colour his descriptions and views of their interactions. There are changing suggestions of who was involved in the kidnap, and more than one person dies as a result. Also unusual for Macdonald’s novels is the treatment of relations between men and women during the course of the novel – Cross does not remain unaffected by Mrs Johnson, for example, and his colleague Ann Devon finally gets her boyfriend to break free of his mother’s unhealthy influence. These relationships certainly aren’t treated in a romantic way, but more as deep feelings which the characters themselves don’t necessarily understand or even want to feel (Ann’s especially), and Cross is forced to consider that Mrs Johnson might have had more involvement in the kidnap than she protests.

The women in this book are well-characterised, and they’re the strong ones, alongside weak husbands, weak sons and drifters, though as a consequence of the time of writing, have little influence within the confines of the law, and are forced to act predominantly through the men in their lives.

I was interested to see that the relationship between two of the characters came about through shared service on the US Navy ship Eureka Bay, which is also mentioned in Macdonald’s later novel Sleeping Beauty, and the fire which terminated Miner’s naval career also affects characters in the later novel.

The conclusion, when it comes, is surprising, though not excessively so, and the ending (at least for some of the characters) is a happy one. It’s not as good as Macdonald’s other books, possibly because Cross is involved in a fairly straightforward kidnapping – whereas Archer’s cases are a good deal more complicated – and the general tone of cynicism is lacking.