The Blades of the Rose – Zoe Archer

Having read these four books consecutively, I think it’s easier to write about them together rather than separately. The Blades of the Rose is an international organization, with their headquarters in England, dedicated to ensuring that magic ‘Sources’ are not misused, and are left with the peoples who have produced or who care for them. Their main adversaries are The Heirs of Albion, whose aim is to collect as many Sources as possible and to use the magic thus gained to enlarge England’s influence and expand the British Empire.

The books are set in an alternative-universe nineteenth century – between the years 1874 and 1876 – where magic exists and can be used and manipulated. They feature many recurring characters, both ‘Blades’ and the ‘Heirs’, their antagonists. The Blades are, naturally, on the side of peace and justice and brotherhood, and the Heirs are arrogant, privileged, and regard the English Blades as traitors to their country. Although each book is consistent with itself and concludes logically, it does make sense to read them in order, since plot strands do wind in the later books and are concluded in exciting and thrilling fashion in the last book, Stranger. 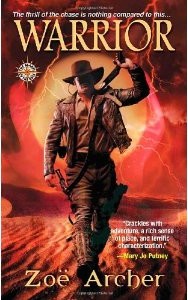 The first book, Warrior, begins in Southampton. Captain Gabriel Huntley, recently sold out from Her Majesty’s army, has returned to England and vaguely plans to return to his home county of Yorkshire and perhaps marry. Hardly has he stepped off the boat, however, than he comes across a man being attacked by a gang of thugs in an alleyway, and goes to the victim’s aid. The thugs eventually depart, after letting loose with a peculiar weapon, but Tony Morris, their victim dies: not, however, before giving Huntley an important message to deliver, and his papers for passage to Mongolia.

Once there, Huntley delivers the message to the Burgesses, father and daughter, who have lived in Mongolia for many years, and which warns them of an attempt to find a Source in the country by a band of Heirs. Her father being injured – a broken leg – Thalia and their servant Batu must travel instead to find clues to the Source’s location and then protect it from the Heirs. Although she insists that Huntley cannot help, he takes it upon himself to do so, and in fact Thalia and Batu soon find themselves glad of his aid.

This is an adventurous story, with lots of interesting detail about Mongolian culture, and a passionate, if predictable, romance between Thalia and Gabriel. The plot itself is intriguing, with plenty of mystery, problem-solving, flighting and natural disasters, as well as magic. Thalia is independent and not at all the typical Victorian miss, though she’s given reasonably sound sociological reasons for being so. Almost everyone in the book, apart from the dastardly Heirs, is extraordinarily broad-minded, and accepting of Thalia’s competence – which I don’t think would have been the case at the time. 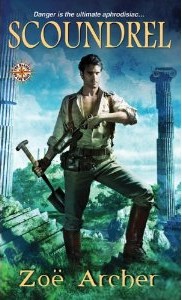 Scoundrel takes place primarily in Greece, and in it we see another romance, and another search for a Source, undertaken against the clock and against another group of Heirs. However, the relationships in this book are less straightforward, due to the character and situation of the heroine, London Harcourt. London is daughter to Joseph Edgeworth, one of the highest-placed of the Heirs. Since, unlike the egalitarian Blades, the Heirs consider women to be frail flowers fit only for home-making and child-rearing, London has been told nothing about the work on which her father and brother Jonas (and, formerly, her dead husband) are and have been engaged upon. However, London has a secret pastime, the study of ancient languages, and it’s only this hidden skill, suddenly revealed to her father, which prompts Edgeworth to take his daughter abroad, hoping that she’ll be able to decipher some inscriptions found at an archaeological site on the island of Delos.

Bennett Day and Athena Galanos, both members of the Blades of the Rose, firstly abduct London, telling her what the Heirs plan to do, but release her when she’s loyal to her father. It’s only later, on Delos, that she realises that she doesn’t agree with the Heirs’ beliefs and methods, and runs away with Day and his companions with precious knowledge of the next place to look for the Source.

Her skills with ancient languages (as well as modern Greek) come in extremely handy, and she falls in love with Day, an inveterate and successful womaniser. There’s also a parallel romance between Athena and their ship’s captain, Nikos Kallas, though it’s not described in anything like as much detail and is seen from the points of view only of Day and London.

For the time in which the book is set, London is a much more believable and realistic characters than Thalia, and her motivations and struggles are sympathetically portrayed. Her relationship with Day and his love, respect and admiration, as well as her friendship with Athena and Nikos, help London to escape her stultifying and limited life into real freedom and flowering of the self: it’s a touching transformation. 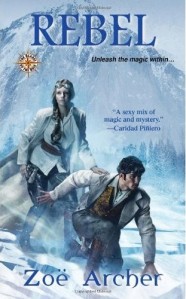 There’s a complete change of scene in Rebel, to that of the wilderness of Canada’s North-West Territory in autumn. The story follows Astrid Bramhill, a voluntary exile from the Blades after the violent death of her beloved husband Michael, killed by one of the Heirs on a mission in Africa. At a remote trading post she meets Nathan Lesperance, a Native attorney practising in Victoria, many miles distant, who has travelled to retrieve the effects of a Victorian man who died in the area. Two days later, on her way home, Astrid encounters Nathan again, but he’s stumbling around, naked, seemingly having been attacked. She discovers that he’d been captured by a group of Heirs: we soon find out it’s because he can shift shape into that of a wolf.

Astrid determines that she must help him, and they set off on a journey to find a tribe of Earth Spirits – similarly shape shifters – where Nathan can learn more about his heritage and escape the Heirs. Chief Iron Wolf tells them of the tribes totems, which Astrid thinks must be Sources, and the objects of the Heirs’ quest. She and Nathan leave the tribe in order to find the totems and protect them from the Heirs.

It’s only when two other Blades – the oft-mentioned Catullus Graves, once Astrid’s friend, and American Max Quinn – catch up with Astrid and Nathan that the primary reason for the Heirs’ presence in Canada is revealed – and it isn’t the totems after all (though they’ll take these if they can).

Astrid’s a competent, strong woman, encased in a shell of stony grief. She’s not altogether sympathetic, since one feels that she’s stubbornly holding onto her grief and isolation for their own sake. She and Nathan make a rather annoying couple, actually, once they declare their love for each other, though their early relationship is snippy and rather combative. Perhaps it’s the way she’s shown as transformed by her love for Nathan that rather annoyed me (and the ways she’s also described in the fourth book), as though the natural healing power of time was not enough, and she required the love of a good man to save her from herself. 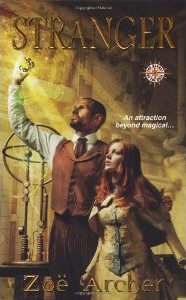 The last book, Stranger, follows the events of Rebel very closely, with Astrid, Nathan and Catullus travelling back to England in order to try and thwart the Heirs who have activated the ‘Primal Source’. This book focusses primarily on Catullus Graves and Gemma Murphy (whom the reader met briefly in Rebel). Gemma has overheard the three friends talking about the Blades, the Heirs and Sources, and decides to follow them in hope of a journalistic scoop. Being a democratic American – and one with no colour prejudice, either (a good thing since Catullus’ family is descended from former African slaves) – Gemma is definitely anti-Heir and pro-Blade; and definitely pro-Catullus.

There’s a good deal of adventure and excitement in this book, both physical and supernatural, as well as Catullus and Gemma’s adventures in Faerie in search of Merlin. It all builds up to a spectacular climax in London, with all the Blades together, fighting the Heirs.

Let me say straightaway that I really enjoyed these books: there’s quite an exotic flavour to them, and their settings felt well-realised and naturalistic (except Faerie, naturally). There are moments of humour, and the main characters are usually sympathetic and well-drawn. The plotting is fast-paced, and the quests for the Sources (or other magical objects) in each of the books give a series of challenges to be met by our doughty, determined and courageous heroines and heroes. Archer tells her stories from the – mostly alternating – viewpoints of the main couple in each novel, which means that the thoughts and feelings of both are conveyed to the reader.

However, there is a lot of sex in these books which I feel detracts from the plotting – perhaps this is more noticeable when the books are read consecutively. Perhaps it’s a convention of romance novels (a genre I tend not to read much, apart from Georgette Heyer), but the heroes are constantly and often inconveniently aroused by the heroines; none of the women ever seems to have her period during the course of the novel (and none of the men ever ask); no-one ever worries about contraception (except for Athena’s herbal contraceptive which London drinks in Scoundrel) or the possibility of pregnancy; and none of the men are anything but well-endowed in the trouser department. Perhaps it’s strange that I can willingly suspend disbelief when it comes to magic but not when it comes to unrealistic sex?

The language used to describe sexual intercourse is rather repetitive, the same phrases occurring in separate scenes, so that I’d have preferred it if Archer had cut down on the number of sex scenes she actually describes in detail. That’s one of the better things about Stranger, in my opinion: Gemma and Catullus clearly fancy the pants off each other, but there are only three sex scenes between them both. I think in these books, where there’s so much action and adventure, that the sex bogs down the action unnecessarily, and often seem highly unlikely, not to mention unrealistic.

The writing style is workmanlike and readable, though Archer tends to over-use certain favourite adjectives and phrases – eyes are “crystalline”, bodies are “sleek”, and “blood turns to sleet”, for example – and her “good” characters have distinctly 21st century cultural and intellectual mindsets. Her villains aren’t very well characterised, most appearing to be mindless followers, insane, or psychopaths, though she does at least portray some as competent leaders. Archer does show, particularly in Soundrel, the difference in attitude towards London shown by Bennett and Thomas Fraser, an Heir who only is interested in London as a source of potential influence within the organisation of the Heirs, and a closer relationship with her father, as well as a pretty woman to take as a wife. Bennett admires her intellect and her hunger for life and experience, as well as her beauty, and that’s what makes their relationship a believable one.

However, the books could do with better editing, since Archer seems to mistake the meanings or usages of some words, significantly with ‘reconnoiter’ (to scout or look ahead, particularly in a military context) in Stranger which she uses twice incorrectly where the word should be ‘rendezvous’ (to meet up with later). These niggles aside, these books are fun, exciting adventure stories, with main characters who gain purpose and change through their adventures, and who learn more about themselves through falling in love. Just be warned about the sex if you don’t read many romance novels.