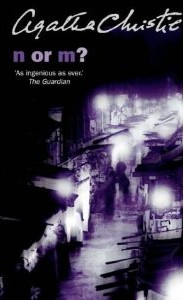 This is the third of the five books featuring Christie’s husband-and-wife detective team, Tommy and Tuppence (really Prudence) Beresford. It’s the early days of the Second World War, and both Beresfords, who served in the first war and later worked for Intelligence (as told in The Secret Adversary and in Partners in Crime), are feeling down-hearted that their country doesn’t seem to want them to serve in any capacity, whereas their two children, Deborah and Derek, are both in uniform. One evening, a Mr Grant, a colleague of the their former boss in Intelligence, Mr Carter, visits to put a proposition to Tommy – the task of trying to find one or two German agents – N or M – who act as fifth-columnists. Tommy is directed to keep his destination a secret, even from his wife, and starts off shortly, ostensibly to Scotland. When he finally reaches his ultimate destination, a boarding house, Sans Souci, in Leahampton, he finds Tuppence already installed as Mrs Blenkensop!

There is a whole bunch of suspicious characters in residence at the boarding house, not least Mrs Perenna, the proprietor, who is Irish and has a grudge against the British, as well as Carl von Deinem, a young German doing important chemical work at a local factory, but who is under suspicion. The characters are sharply written, from Sheila Perenna, unhappily in love with von Deinem, to hypochondriac Mr Cayley and his devoted wife.

Tommy and Tuppence are delightful characters even if you haven’t read about them in their previous adventures: light-hearted yet determined, and intelligent. Their relationship is touching, too: there’s a lovely bit where Deborah comments on her mother’s duplicity in pretending to be staying with an aged aunt whilst she’s elsewhere tracking down Nazi agents, and reacts with horrified disbelief at the thought that she’s gone off with another man:

‘If you think Mother’s just gone off weekending with someone you’re absolutely wrong. Absolutely. Mother and Father are devoted to each other – really devoted. It’s quite a joke in the family. She’d never – ‘

The mystery is intriguing, too, with the two of them gradually tracking down both enemy agents, one a man and the other a woman. They aren’t like Poirot, with his super-sleuth tendencies, being ordinarily intelligent – though Christie does play cleverly with the narrative to increase the tension at certain point when she makes the reader think that her characters are walking into danger.

While available as stand-alone books (as the illustration above), my copy is in an omnibus with other ‘stand-alone’ novels which Christie published in the 1940s. N or M? is the one which most closely deals with wartime conditions, since the remaining two published during the war years (in 1944 and 1945) barely reference the war, if at all, and may well have been set in the pre-war years. These two, Towards Zero, and Sparkling Cyanide, will be reviewed shortly.