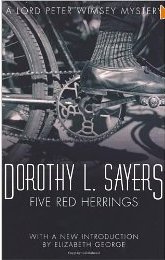 Although this book – one of the series of detective novels featuring Lord Peter Wimsey – was written after Strong Poison, this book does not feature Harriet Vane at all, nor is she mentioned. It was written, as Sayers wrote to her publisher, Victor Gollancz, after complaints from some critics that Wimsey fell in love and talked “too discursively”: in Five Red Herrings, “no-one falls in love (except, perhaps, Campbell) and every sentence is necessary to the plot. Much good may it do ‘em!” *

Unlike Have His Carcase, in which the setting was invented for the plot, in Five Red Herrings the setting is entirely real, being set in south-west Scotland around Gatehouse-in-Fleet and Kirkcudbright, which Sayers knew well. Her main characters, apart from Wimsey and the police, are primarily artists: in the first sentence of the novel Sayers reports that “If one lives in Galloway, one either fishes or paints. ‘Either’ is perhaps misleading, for most of the painters are fishers in their spare time.”

The first chapter begins in the McClellan Arms pub, and introduces us to Campbell, “the landscape painter” who is drunk and quarrelling with Waters, another artist, but who is English – this seems to be reason enough for Campbell to find him objectionable. Harsh words are spoken and the men almost come to blows. After Campbell flings himself out in a rage, one of the onlookers mentions that Campbell has not endeared himself to several others in Gatehouse: Strachan, Hugh Farren and Jock Graham. Not much later, we also learn that he has fallen out with the eminent artist Gowan, and his next-door neighbour Ferguson.

The next chapter begins with the news of Campbell’s death in the early afternoon of the following day, apparently drowned by falling into the stream beside which he was painting. Interested by this news, Wimsey decides to go along and have a look.

“Over the bridge and away to the right by the kirkyard, and then the Bargrennan road, curling like the road to Roundabout, with the curves of the Cree glittering through the tree stems and the tall blossoms and bracken golden by the wayside. Then the lodge and the long avenue of rhododendrons – then a wood of silver birch, mounting, mounting, to shut out the sunlight. Then a cluster of stone cottages – then the bridge and the gate, and the stony hill-road, winding between mounds round as the hill of the King of Elfland, green with grass and purple with heather and various with sweeping shadows.”

While looking at Campbell’s belongings, as the police retrieve the body from the stream, Wimsey notices that something is missing and a search is made for the item, but without success. Sayers plays unfair with the reader by not mentioning what it actually is until much later in the book, noting:

“(Here Lord Peter Wimsey told the Sergeant what he was to look for and why, but as the intelligent reader will readily supply these details for himself, they are omitted from this page.)”

By various signs, including the rigidity of the corpse, the missing item and the character of the deceased, Wimsey is sure that Campbell has been murdered and sets to find out who did the deed. His own thoughts lead him to the conclusion that it must have been an artist (to fake the painting supposedly painted by Campbell), and draws up a list of six suspects with whom Campbell had quarrelled violently.

The investigation is hampered by the realisation that almost all of the potential suspects have disappeared, and none of them can account for their movements in the evening after Campbell left the pub, and the discovery of his body at two o’clock the next afternoon.

This is one of Sayers’ most traditional detective novels, with painstaking work undertaken by the police and Wimsey to find out what the suspects were doing in the pertinent time, and why, and how the crime was committed. Some readers may find the discussion of train timetables and possible routes of escape rather tedious, as well as careful breaking down of alibis and much conversation where all the detectives discuss their theories. Along the way, we learn more about the Farrens’ marital troubles, Strachan’s near death experience, Gowan’s close shave, and why Jock Graham refuses to explain where he was during the time in question.

Naturally all is unravelled at the end, as Lord Peter explains his reasoning for his solution to the crime, and the whole series of events is reconstructed. It’s very cleverly done, ingenious and yet plausible.

One of the things that interested me in re-reading this novel is how cynically Sayers portrays marriage in this book. Strachan, Ferguson and Farren are married, but Strachan seems to despise his wife, Ferguson and his wife are separated, and Farren is jealous of his wife, Gilda (leading to his quarrel with Campbell) but simultaneously longs to escape from domestic tyranny. Although single, Jock Graham appears to be entrapped by a woman who gives him an alibi for the night in question. Two women artists are happily single, and Sayers appears to be implying that for painters and artists, marriage is not a natural or happy state.

Sayers writes vividly and clearly, though some readers may dislike the way she attempts to write the Galloway dialect phonetically (it doesn’t bother me), and her descriptions are often lyrical and rhythmic, as in the extract above.

Apart from the slightly tedious railway timetable discussions, this is an entertaining detective novel with a cast of sympathetic characters and an ingenious but plausible crime, which is solved by observation and deduction on Wimsey’s part.

*I’m quoting from memory so can’t guarantee the wording.