MacLean’s thrillers have often been filmed (perhaps most famous are The Guns of Navarone and Where Eagles Dare, with their starry casts, though there are others, not so well known), and he sustained a long career with success – though his books do approach a formula in which the same tropes appear. Although I’d been aware of his books for a long time, the first time I actually read one was when I was seventeen or so: I don’t remember which one I read first. Since then I have read a lot of his books (by no means all) and generally enjoyed them – they’re fun to read in an enjoyably escapist, lone man struggling against well-armed and clever adversaries kind of way. There are some which approach the spy thriller (in the Fleming kind of way rather than the more realistic style of Le Carré or Deighton), some set during the Second World War, and some which are straightforwardly thrillers. Many are set on board ships or other floating craft, and a few in the Arctic (such as Ice Station Zebra and Night Without End).

I’ve recently been reading (and re-reading) a few of his books – interspersing them with suspense novels by Mary Stewart – which are something of a contrast: though Stewart is by far the better writer.

The Golden Rendezvous (1962) is set on board a cargo ship, the SS Campari, which also has on board a few very rich or distinguished passengers. While cruising in the Caribbean, and having taken on cargo at an unnamed island (possibly intended to be Cuba – references are made to ‘the generalissimo’ rather than to a real president or head of state), the Campari finds herself taken over by a group of men who intend to rob another ship, the Ticonderoga, of the cargo of gold bullion she is carrying. With Captain Bullen out of action – shot – it’s left to Chief Officer Johnny Carter to figure out what the bad guys are really after, how they plan to do it, and also, crucially, how to thwart them without seeming to. This is very typically MacLean, even down to the hero’s name (almost all MacLean’s heroes seem to be called John), with several action sequences, the turning the tables on the villains, and the hero having a trusty sidekick (usually a Scot – from the Highlands as he is in this case). That said, I enjoyed it very much (apart from Susan Beresford, who is rather irritating – that’s not her fault, but MacLean’s), since the plot’s clever, the heroes have to overcome serious odds, and it’s very exciting. 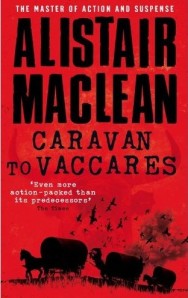 Next up was another re-read, that of Caravan to Vaccarès (1970). This one begins in a cave, where a particularly brutal murder takes place, but then the narrative drops us into a situation without explanation – a hotel near Les Baux, in the south of France. Neil Bowman is investigating the gypsies on their annual pilgrimage to the shrine of their patron saint in France: while doing so he inadvertently involves his dining companion, Cecile Dubois (her friend Lila Delafont is accompanying the flamboyant gourmand and folklorist, the Duc de Croytor, and is also staying at the same hotel), and they have to escape together. I like this one a lot – the setting is interesting, the plot quite realistic, and Cecile gives active aid rather than being a plot device. There are genuinely menacing bits, and the first-person narration helps to foster the immediacy of the action.

Seawitch (1977) was written under a pseudonym, and takes as background the oil industry, though it’s only an excuse for a sort of revenge-thriller plot which in the end doesn’t make sense. Lord Worth, proprietor of an oil company which is undercutting its rivals, and who is not above industrial espionage, is threatened by a John Cronkite, and takes affirmative action. Cronkite is a troubleshooter for the oil industry, being particularly good at extinguishing well fires, and feels slighted by Worth after he took the oil magnate to court for non-payment of fees (MacLean portrays Cronkite as not having a case) and lost: now he’s lost all sense of proportion and determines to make Worth pay. This he would doubtless do were it not for Mitchell and Roomer, two entirely honest former policemen and now private investigators, who are in love with Melinda and Marina, Lord Worth’s daughters. In my opinion, MacLean was coasting in this one – apart from Lord Worth, none of the characters are individual, Marina is ridiculed for thinking that her boyfriend is bad because he kills bad guys (frankly, I’m with Marina on this one, whatever MacLean and his male characters think), and the ending is indefensible. Still, there are some exciting bits, but they don’t make up for the rest of the plot.