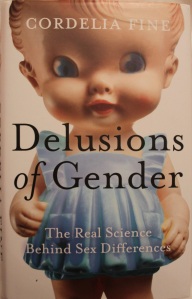 I was first introduced to this book by Nymeth in her excellent review back in January this year: it sounded interesting enough to buy straight away, though it’s been several months since it was first put onto my to-read pile. Cordelia Fine is an academic psychologist, and her aim in this book is to review – not necessarily the science of gender difference, but the interpretation by psychologists and neurologists that essential gender differences exist which have a basis in biology.

Fine begins her survey of the literature with various popular writers who have found huge differences between the way men and women behave, interact, and in general think about things, and have concluded that there is some innate biological differences which make men, on the whole, ‘systemisers’, and women ’empathisers’. Fine’s surveys of the studies which have led to these conclusions being drawn, however, show that they don’t stand up to serious scrutiny, or else could easily be explained by factors other than innate differences between the sexes. It’s not that she argues in the book that there aren’t differences between men and women, but rather that these are more the result of social pressures and expectations. For instance, she talks about the existence of “stereotype threat”, and summarises several studies which indicate that if people – both men and women – are subjected to some sort of stereotype before a test, this can significantly affect the results of these tests. If people taking the same maths test are told firstly that women tend to perform slightly better than men at this test, then, surprise, surprise – women do perform better than if no positive reinforcement exists. Similarly, if the test is prefaced by a negative reinforcement – that women generally perform less well than men – then their results are significantly poorer. It’s no wonder, she says, how even this slight reinforcement (or not) of generally accepted stereotyped differences between the sexes could equally well restrict a choice of career. 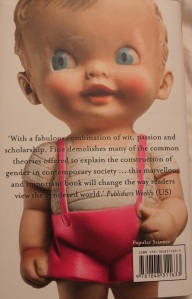 Fine summarises excellently and makes the science she’s surveying accessible to those of us who know nothing about psychology or neuroscience. She’s also pleasantly sarcastic from time to time. There’s lots of very interesting detail of many studies, such as the one using CVs of identically qualified people where women were less often preferred to men for management or academic jobs. She does point out where such studies have their own drawbacks and limitations, which doesn’t, I think detract from the overall conclusion she draws from all these studies – which is that any study which seems to be arguing for an essential gender difference based on brain structure “wired from birth” is flawed: there are too many social pressures existing on us to conform to a generally-understood gender identity for this to be automatically true.

There are some mixed reviews of the book on Amazon, perhaps understandably, since Fine is knocking what she calls “neurosexism”, whereby people are reinforcing their own stereotypical ideas about what it is to be a man or a woman with “science” – which they’re saying makes gender differences, and sexism resulting from such differences, all okay, because really, neuroscience has proved that men are better at maths! Honest! Mind you, it is scary to realise that even you, the reader, shares, to some extent, that implicit gender bias, however much you think you don’t.

She mentions that recent theories of how girls and boys learn (differently, naturally) should mean that they are taught in single-sex classrooms and using different methods: boys studying Lord of the Flies are encouraged to draw maps of the island, and girls studying maths have a graph drawn relating to a relationship. Single-sex education is likely to be better for both boys and girls, but not because they learn in so different ways: more because a class of girls will not be threatened by a stereotype which says that boys are better at maths, and similarly a class of boys will not be threatened by the reverse stereotype which says that girls are better at art.

It’s fairly clear from her text, however, that Fine doesn’t take the “atheist” position, thinking that there are no gender differences which are innate and not learned, but more the “agnostic” position which states that there is no technique we have currently that can show that gender differences are due to anything but social pressures and expectations. Even parents, when they think they’re being carefully non-gendered, still behave differently with girls and boys, so that any differences soon escalate.

This should be required reading for everyone, and we should keep on thinking about these matters; after all, as Joan Smith phrases it, that “Women are expected to be different from men but the same as each other,” but there are more differences between women, as Fine says, than there are between women and men. Highly recommended.