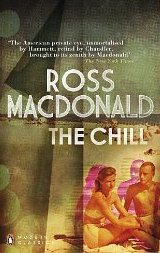 Lew Archer is hired by a young man, Alex Kincaid, to find his wife Dolly, who has suddenly disappeared. They had not known each other long, and Alex has not been able to persuade the sheriff’s department to take her disappearance seriously. Archer takes the case, and in fact finds Dolly quickly, but of course complications arise. She’s been seriously disturbed by a visit from a man from her past, and then the death of her college professor, Helen Haggerty; in fact, she claims hysterically that she caused Helen’s death. Kincaid and Archer aren’t convinced, but Archer realises that Dolly may know more about the crime than she’s revealing, and he hopes that by installing her in a home run by Dr Godwin, who once treated Dolly for psychological issues several years ago, she may come to be able to remember more clearly what happened.

It’s revealed that Dolly’s father has just been released from prison, and he claims that, despite his daughter’s testimony at the trial, he did not kill his wife. Archer discovers that Helen’s death may be linked to another crime in Bridgeton, near Chicago, Helen’s home town, many years before, and eventually straightens out the complicated ties which bind the characters together, and finds out what happened and why.

The Chill is something of a change from the last book reviewed. The plots of Macdonald’s books often turn on long-hidden secrets and past crimes, and this is nicely done in The Chill. The twisted relationships between members of families are investigated and there are contrasts between Helen’s relationship with her father, a former cop, and Dolly’s with hers, as well as Dean Bradshaw’s (he’s the dean of the college where Dolly studied and Helen taught) with his mother. Everyone is lying, for what seem like them to be good reasons, but Archer is able to pick the truth, through perseverance and diligence.

He has a rather tetchy relationship with the local law enforcement officers, particularly since the sheriff’s department is convinced that Dolly killed Helen, and think that Dr Godwin, abetted by Archer, is deliberately sheltering a murderer. Macdonald, through Archer’s voice, presents the characters dispassionately; they are well-rounded and realistic (sometimes horrifyingly so), and even those, like Helen, who appears only briefly in the flesh before her death, seem like a real person with a personality of their own. None of these people are stereotypes. The characters are memorable, and Archer is both cynical about others’ motives while also willing to see the good in them.

Macdonald also has a great way with descriptions, both of people and places:

I’d already guessed it from her orphaned air. I followed her along a musty hallway to the main room, which was high and raftered. Spiders had been busy in the angles of the rafters, which were webbed and blurred as if fog had seeped in at the corners. The rattan furniture was coming apart at the joints. The glasses and empty bottles and half-empty bottles standing around on the tables and the floor suggested that a party had been going on for some days and might erupt again if I wasn’t careful.

I prefer Macdonald’s writing to Chandler’s, with whom he’s often compared: it’s not as showy, but more precise, and his books are much more tightly plotted. I don’t think I’ve ever read a bad book by him.