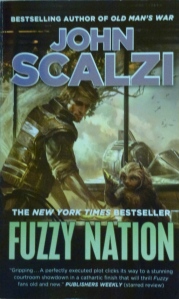 Fuzzy Nation is a re-imagining of the story and events in Little Fuzzy, the 1962 Hugo-nominated novel by H. Beam Piper – Scalzi describes it as a sort of “re-boot” of the Fuzzy universe. I’ve not read the original novel, so can’t comment on how different Scalzi’s version is compared to Piper’s, but I really enjoyed this. I’ve previously read only Old Man’s War of Scalzi’s books – I’m not sure whether all his books are in print in the UK, since my copies were bought as US imports from Waterstone’s Piccadilly, which has quite a good selection of imports in its SF&F section.

Jack Holloway is a former lawyer now working as a mining surveyor on the planet of Zarathustra XXIII under contract to ZaraCorp, a not particularly pleasant mining corporation whose attitude towards the environment is ambivalent to say the least. After charges he has set off reveal a massive sunstone deposit (a form of gemstone unique to the planet), he is fired from ZaraCorp but then manages to get re-hired under a slightly better contract.

When returning to his house, he discovers a new species of fauna – adorably cute and apparently more intelligent than his dog, Carl. He tips off his former girlfriend, Isabel Wangai, who is a xenobiologist working for ZaraCorp, about the cute ‘cat things’ and she goes out to have a look. Pretty soon, Isabel is convinced that the fuzzies are a sentient species and thus ZaraCorp’s license to mine the planet would be invalidated.

There follows a lot of shenanigans, involving ZaraCorp’s higher echelons of management, Jack’s expertise in a court room, Isabel’s current boyfriend, Mark, who’s a practising attorney, a thug working for ZaraCorp’s security, and a court-room showdown.

It’s hugely entertaining stuff, but manages to make serious points about the environmental costs of mining, the ethics of how we treat other species, and corporate psychopathy. The characters are nicely drawn, and combative relationship between Isabel and Jack is realistic, as well as the loyalties which build over the course of the novel. Jack is not presented as the nicest person, overly concerned with money, and able to lie and manipulate with the best of them. But, as he points out to Mark at the end of the book, he might not be a good man, but he was the right man for the job. In fact, one could argue (and he probably would) that a good man would not have been able to resolve the situation in the way he does – by being sneaky and selfish is the best way to deal with a corporation almost solely focussed with profit. I was certainly almost cheering by the end, particularly for the judge presiding over the trial.

Anyway, I really enjoyed this, with its mix of seriousness and humour, the backbiting and courtroom one-upmanship, and the danger and well-drawn, realistic characters. Highly recommended.