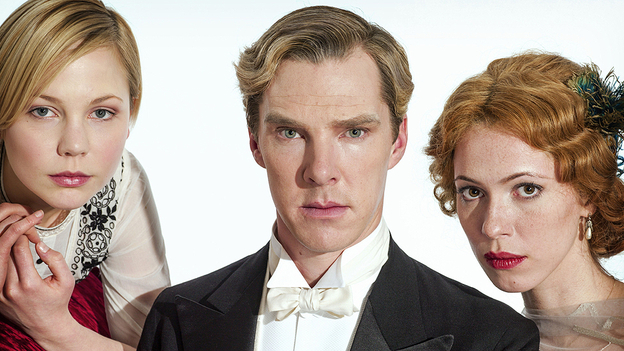 Since I’ve caved in and subscribed to Amazon Prime, I’ve been watching a lot of films and US TV shows this way. One of those included in the subscription was Parade’s End, a dramatisation of three of the novels comprising the trilogy (or tetralogy, depending on whose authority you take) Parade’s End, by Ford Madox Ford. The dramatization by Tom Stoppard (who’s a brilliant playwright), inspired me to start reading the books, and so I may comment on those when I’ve finished them.

The TV series, shown in five episodes of about an hour long each, stars Benedict Cumberbatch as Christopher Tietjens, Rebecca Hall as his wife Sylvia, and Adelaide Clements as Valentine Wannop – the main characters. From my reading of the first chapter of Some Do Not… (the first novel), I’m not sure about the casting of Cumberbatch to physically resemble Tietjens as he’s described – he’s described as a large man (tall and beefy), and Sylvia refers to him as an ox, which puts one more in mind of someone of rather different stature. That’s not to say that Cumberbatch is not anything but excellent as Tietjens, and Rebecca Hall does fantastic work making Sylvia both appalling and yet strangely sympathetic – for which Stoppard also deserves credit, since his script does deviate from Ford’s novels.

The series is told in roughly chronological order, skipping through the four or five years prior to the First World War, and showing us Tietjens as the younger son of a long-established family in (of all places) Yorkshire, his relationships with his family (Rupert Everett as his elder brother, Alan Howard as his father), his friend Macmaster (Stephen Graham), godfather General Campion (Roger Allam), and his wife Sylvia. Neither is happy in their marriage, Sylvia having married him to save herself from ruin as an unmarried mother, and so exasperated by her husband’s code of behaviour and lack of expression of emotion that she flirts with other men and has actually gone abroad with one ‘Potty’ Perowne (Tom Mison). Although Tietjens takes her back, with conditions, they are ridiculously ill-suited and have almost nothing in common. Her mother, Mrs Satterthwaite (Janet McTeer) puts it rather well that Sylvia has married a man much her superior in intellect (though one who has no idea what his wife is like or thinks about).

That said, until the last episode, Sylvia’s actions and motivations seem entirely plausible – an emancipated woman with an active sex drive, shackled to a man whose emotional inarticulacy is both the result of personal conviction and family pride, but whose education (probably almost nil) doesn’t allow her any connection with Christopher. This is in sharp contrast to young suffragette Valentine Wannop, whom Christopher meets in Rye on a golf course while she’s protesting against a cabinet minister. Valentine is the daughter of a recently deceased professor and a mother (Miranda Richardson) who writes good historical novels, and she’s well-educated and passionate about women’s suffrage. She and Tietjens make an immediate connection, but since he’s married, he refuses to acknowledge those feelings – not that this saves either of them from destructive gossip.

The last two episodes are set during the war, both in France, where Tietjens is acting as a draft officer under the command of Campion, and in England, following Macmaster’s rise, Sylvia’s (amusing) manipulations and her trip to Rouen, and Valentine’s (and her mother’s) life as a pacifist and as a teacher (of games, which seems to be wasting her talents rather). Adelaide Clements is lovely as Valentine, though she doesn’t seem to age at all during the six or so years over which the drama’s set, so that she seems often as young as her pupils.

You have to pay attention to the drama and the dialogue, since not all the relationships are obvious or set out clearly, but it definitely will repay watching again; and I will. The cast is excellent, and the costumes beautiful. The settings are nearly all excellent and appropriate (the ones set in wartime France are particularly good), though I’d quibble with the rather obvious shot of Sylvia and Christopher standing at the top of chalk cliffs at a point where they are meant to be in Northumberland (not known for its chalk outcrops).

Well, we’ll see how the novels go. Have to say that Tietjens is so far more appealing as Cumberbatch than as he’s described in the novel, but Hall seems spot-on as Sylvia. There do seem to be some variations – Tietjens has more family in the book, and Sylvia’s son is Tommie in the book, Michael in the dramatisation, and so on – and there is explicit reference to sex even if there’s nothing gratuitous on show (though there is a scene with a naked Sylvia having her bath and Tietjens can’t look at her, even though she’s his wife, which is a beautifully well-observed moment). Even so, the writing is appealing, and I think I’m going to enjoy the books.