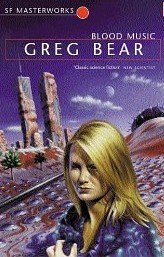 This novel started off life as a short story (which won both Nebula and Hugo awards for best short story), which Bear afterwards expanded to novel length. Like Eon, the only one of Bear’s other books which I’ve read, this is ‘hard’ science fiction, though in this case, it’s cellular biology which forms the basis for the novel.

Vergil Ulam is a researcher at Genetron, a company specialising in biochemical and genetic research; at the start of the novel he is currently working on – unbeknownst to his superiors – a project which he feels may be the start of an organic computer, with treated mammalian cells. On the day the novel opens, a distinguished visitor, Michael Bernard, arrives by invitation, though Vergil attempts to forestall the meeting and talk to Bernard about his own research. His attempt does not succeed, and in fact he is then summoned to explain his secret research, later being told to destroy it under pains of being fired. Vergil destroys much of his experiments, but hides some, and continues working on his project, though finds himself fired for good some time later and ordered to clean up his lab. Under cover of doing this, Vergil injects himself with a sample of the altered cells, and departs.

It’s not long before Vergil realises that his instinctive measure to protect his creation is altering his own body – making it more efficient – his hayfever disappears, his flat feet and bad back correct themselves, his eyesight becomes perfect. However, he realises that the cells, or noocytes, as he dubs them, are not only making these changes, but doing so cooperatively, and are gaining some kind of consciousness from him. He drafts in his friend Edward, a doctor, to see what can be done to slow down the spread of the cells, but it’s clear that nothing in current medical science can help.

The cells begin to spread outwards from Vergil, infecting everyone he has come into contact with, and in a short time, the entire continent of North America has been affected. Michael Bernard, himself one of the first people to be infected, flies to Germany, where he demands to be researched at the lab of his friend Paul. The ‘plague’ causes all sorts of international complications, fear, anxiety, and (of course this still being the Cold War phase between the superpowers) not a little belligerence on the part of the Russians.

I think this is an interesting and even visionary book, though it feels rather stretched in places, and despite the insight one gets into the lives of certain characters, the reader never feels entirely close to them. Even Suzy, a young girl from New York who finds herself one of the very few people uninfected, and whose story is perhaps the most affecting, doesn’t feel altogether real and alive. Perhaps Bear was more concerned with conveying the ideas and his plot than creating sympathetic and understandable characters: as it is, they are just props to hang the plot and those ideas on. Which doesn’t make it a bad book, in my opinion, just not particularly involving.

I don’t necessarily need explanations to be given for everything, but Bear never explains why certain people seem immune from the noocytes (at least, to begin with), such as Suzy, how the cells appear to be able to manipulate non-organic matter, and how Bernard’s noocytes can apparently communicate all their information both from and to the mass of material across the Atlantic, when he’s in a sterilised and isolated research chamber.

I read this in a Gollancz SF Masterworks edition, which is a great series, though the poor proof-reading annoyed me with a number of typographical errors present.