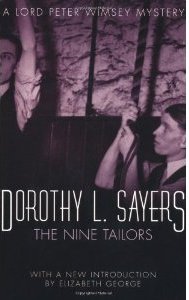 The Nine Tailors is, arguably, Sayers’ best detective novel. It doesn’t sprawl, like Gaudy Night, and, although concerned with a dead body and how it got that way, is also concerned with family, personal honour and campanology.

Lord Peter Wimsey is driving through the wilds of East Anglia on a snowy New Year’s Eve with his manservant, Bunter. They’re on the way to visit some friends of Lord Peter’s in Walbeach when, mistaking the road in the snow, Lord Peter manages to drive the car into a ditch. Luckily they are not far from the village of Fenchurch St Paul, and are given refuge by the rector, Mr Venables. While they are having tea, a message comes to say that William Thoday is too ill to come to the church that night (there is an epidemic of influenza in the parish); as a result, the Rector’s plan of having a full peal rung on the church bells will have to be cancelled. However, Lord Peter used to ring, and offers to step into the breach.

After some practice on the handbells, dinner, and a short sleep, Lord Peter goes up to the church to take part in the late night service, and at the end, start the peal. Nine hours later, the peal is ended, and though the ringers are able to go to a hearty breakfast, the Rector is called away to the Red House to minister the sacrament to Lady Thorpe, who is “sinking fast”. At breakfast, Mrs Venables mentions the story about Sir Charles Thorpe and the jewels, and after the Rector returns with the sad news of Lady Thorpe’s death, Wimsey hears the story in full.

Before the war, a rich relative of the Thorpes was staying with them when her emeralds were stolen. It was established that Deacon, Sir Charles’ butler, was the culprit behind the theft, in collaboration with a thief from London, Cranton, though the jewels were never found. Henry, Sir Charles’ son, who was later injured in the war, felt obliged to pay Mrs Wilbraham the value of the necklace, which was not insured. Deacon died in 1918 after breaking prison and killing a warder, and his widow married William Thoday.

The next day, after his car is retrieved from the ditch, Lord Peter and Bunter set off to Walbeach. Winter ends and spring comes, and Sir Henry Thorpe dies. When his wife’s grave is opened in preparation to receive Sir Henry’s coffin, a body is found, battered and disfigured and nameless. Mr Venables writes to Lord Peter to seek his aid in determining both who the man was and by whom and why he was killed. Lord Peter accepts with alacrity and sets off to Lincolnshire to attend the inquest.

As the investigation proceeds, in conjunction with Superintendent Blundell of Leamholt, it gradually becomes apparent who the man was, why he came to Fenchurch, and – possibly – why and how he was killed. But the murderer is unknown, and remains so until the very end of the book, when Lord Peter stumbles on the truth of what must have happened.

This is a superb detective novel. Sayers gives clues and doesn’t withhold information from the reader, and Lord Peter deduces things rather than leaping to conclusions. There’s a good deal of detail about change-ringing, which I think adds to the atmosphere of the book rather than as something to skip through. The landscape of the Fens is beautifully conveyed in its wild flatness, criss-crossed by dyke and stream and ditch, and the last section of the book, set during the winter floods, is moving and thrilling.

Sayers often wrote lyrically, and this is particularly evident in her descriptions of the bells ringing, the sway of the tower, and the sound going out over the snowy or flooded landscape about the church.

“And over all, the bells tumbled and wrangled, shouting their alarm across the country. Gaude, Sabaoth, John, Jericho, Jubilee, Dimity, Batty Thomas and Tailor Paul – awake! make haste! save yourselves! The deep waters have gone over us! They call with the noise of the cataracts!”

“As his head rose through the floor, the brazen fury of the bells fell about his ears like the blows from a thousand beating hammers. The whole tower was drenched and drunken with noise. It rocked and reeled with the reeling of the bells, and staggered like a drunken man. Stunned and shaken, Wimsey set his foot on the last ladder.

Halfway up he stopped, clinging desperately with his hands. He was pierced through and buffeted by the clamour. Through the brazen crash and clatter there went one high note, shrill and sustained, that was like a sword in the brain.”

Some of Sayers’ language in these passages owes a good deal to the formal seventeenth century English of the Book of Common Prayer and King James Bible, but the description of the flooded Fens and the music of the bells is hers alone.

The characters are sharply conveyed, and realistic; there is no sense of stereotype as one sometimes gets from Sayers’ work. I particularly like Hilary Thorpe, orphaned daughter of Sir Henry, but the Rector and his wife are very appealing, too. Sayers grew up in this sort of place, and its people and preoccupations were evidently not strange to her; she wrote with evident knowledge of churches and ecclesiastical matters, too. Her criminals have realistic motives and the actions which lead to the death which starts the investigation are understandable and plausible.